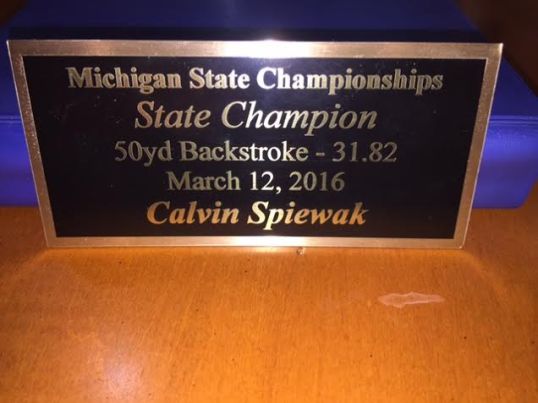 It’s amazing what happens when you change the way you think.

On March 12 this year, my oldest son Calvin won the Title of State Champion for the 50 yard Backstroke in the 10 and under age group at the Michigan State Swimming Championships.  He swam his personal best time of 31.82 sec.

Just a few weeks before I was reading in Orrin Woodward‘s Best-Selling book RESOLVED about former UCLA Basketball Coach John Wooden and his definition of success.  While most people would probably define “success” as winning an event, John Wooden, who is the most winningest coach in NCAA Div. 1 Basketball history (winning 10 NCAA Div.1 Championships in 12 years, 8 of which in a row), defines winning basically as “doing your personal BEST”.  My son definitely had an issue with attitude, he HATES losing!!!  No idea where he got that from??  Calvin focused so much  comparing himself with other swimmers, he totally forgot to do what John Wooden suggests and that is only focus on the ONE thing you have control over and that is DO YOUR PERSONAL BEST.

I still remember the day when Calvin and I drove home from a swim meet where he had lost to competitors  in certain events and he was very upset.  Being upset about a loss is not a bad thing but if your outbreaks of anger affect other people, then that’s not ok.  Of course, I’m not blaming him because guess who he learned that from??  The apple doesn’t fall too far from the tree…  Fortunately, I had just read that chapter in Orrin’s book and we started talking about winning, losing, and doing your best.  I told Calvin how proud Lindsey & I were of him and that we believe God has a bright future for him and I encouraged him to stop spending time thinking about other swimmers and start focusing on the one thing he has control of, DOING THE BEST HE CAN.

Looking back, I am very proud of my son because rather than responding, “yeah, yeah, dad, what do you know about swimming…”, after all, at 10 years old (now 11) he is already way faster then I ever was, he started taking these suggestions to heart.  At swimming events the following weeks he seemed way more focused on himself, visualizing an upcoming race, and getting himself fired up.

A few weeks thereafter, Calvin did really well at the State Championship Meet, not only winning the State Title in the 50 Back but also coming in 2nd for the 50 Free with a PERSONAL BEST individual time of 28.12 secs.  WOW, that’s fast!!!

My family and I are so grateful for the difference that LIFE Leadership has made and is making in our lives.  Having mentors and examples like Orrin & Laurie Woodward, Chris & Terri Brady, and Bill & Keisha Lewis is priceless and truly a blessing.

Congrats again, Calvin, you are an amazing son and I am very blessed to be your father!!!